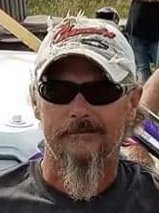 Mike was born on August 10, 1966 at St Mary’s Hospital in Pierre, SD to Myron and Mary (Anderson) Cooper. He was raised on his grandfather’s Ranch on Bad River Road Southwest of Fort Pierre. He attended school in Wendte, SD until the family moved into Fort Pierre in 1975 where he continued his education in the Stanley County Schools. He later obtained is GED.

Mike married Cindy Garrigan and to this union one son, Tyler Scott, was born. He married Tara Delzer and to this union one son, Trystan Michael, was born. Mike worked hard in his life at various jobs, with the most memorable of them being in the swine industry. He worked on the Road Crew for MDS Manufacturing Inc for a time before working in breeding at Starburst farms. His most recent position, at the time of his death, was the maintenance position with Schwartz farms.

Mike was preceeded in death by his parents and a sister, Becky Cooper Elsberry.

Share Your Memory of
Michael
Upload Your Memory View All Memories
Be the first to upload a memory!
Share A Memory
Send Flowers
Plant a Tree