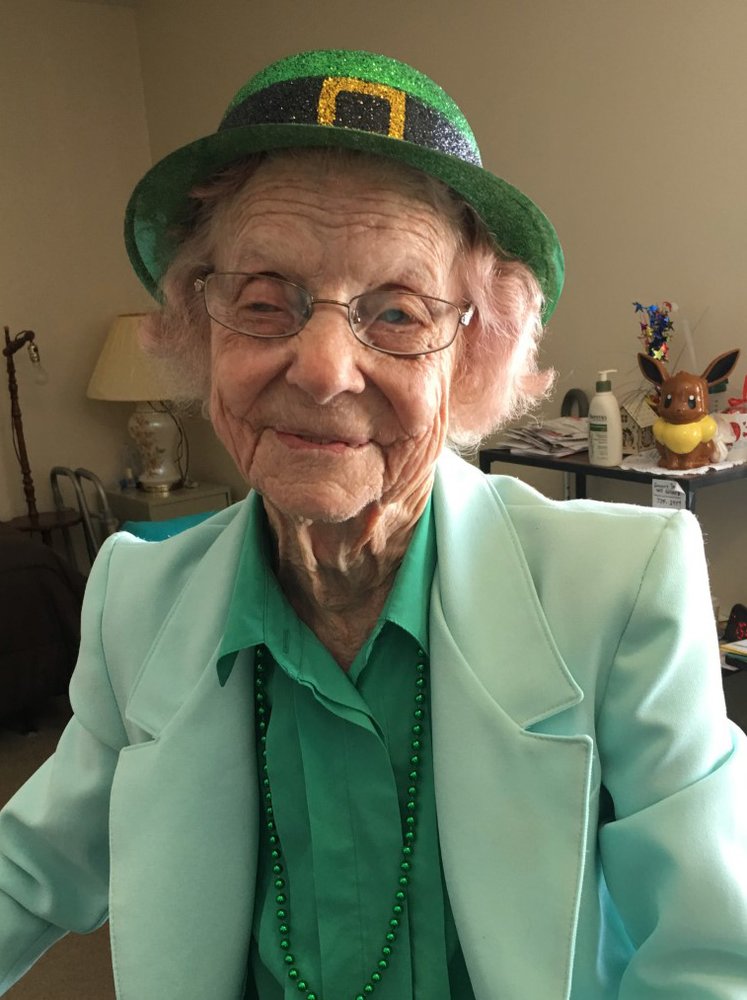 Margaret Louise Klemann was born on March 17th 1915 on a ranch 7 miles southeast of Springview Nebraska to Charles and Elvira Gardner Klemann. Marg was the middle child of the family with William being the oldest and Violet being the youngest. The family moved to Anoka Ne. and Wewela SD. before settling down in Colome. Marg learned early how to work and sew as her aunt taught her how to sew at the age of 7 and she learned how to cook from her mom. Marg was able to attend all 12 years of school in Colome and graduated in 1933. She spent the next 4 years working for numerous families taking care of children, housework, and doing all sorts of sewing and cooking along the way to earn enough money to go to college.  Her busiest job was working with a family that had 14 children. Marg attended Southern State Normal Teachers College in Springfield SD. from the fall of 1937 to the spring of 1939 earning her teaching degree. During this time, she worked fixing hair, sewing, and cleaning houses and apartments to have enough money to continue her education. Her first teaching job paid $40 a month and the second school which had twice as many students paid $100 a month. While school was out Marg worked as a waitress in Winner at the Sweet Shop Cafe along with her friend Girdy Luken earning $7 a week with every other Sunday off. It was there she met Ben Vavra and fell in love and they were married on June 25 1942 in the Methodist Parsonage in Winner with Milton and Alma Rowe Sills standing up for them. Marg was happy to be able to help her parents purchase a quarter section of farm ground 5 miles south of Colome.   While farming and ranching with Ben 5 miles west of Colome, she made her own bath tub and made the house a home.  They had the usual chickens, hogs, and milk cows, but during the spring and fall when Ben was in the field or working with his dad, Marg did all the chores along with milking 13 cows morning and night by herself. The first year was extremely tough as they had no screens on the windows and the house was hard to heat in the winter. Ben's asthma continued to get worse as he could not be around the cattle or hogs. In the fall of 1947, they moved into Colome and opened a privately owned Gamble Hardware Store. While opening up the small store, a bowling alley across the street closed and they purchased the building and completely refurbished it themselves and moved in the same year. Marg always enjoyed making clothes for their daughter Marlyeen Ann and sons Merle Duane and Marvin Daryl. After buying out Pearl Jackson's dress shop which was right next door, helped to make a complete old-time general store with everything from bolts, nails, paint, hardware, dishes, tv's, radios, and clothing. Ben would still go the farm and work the fields and after 6:00 PM. Marg would close the store and go to the farm to run the (big} tractor, scoop grain and always bring extra food so as they could work till dark. During the winter Marg slipped and fell breaking her right wrist, making her do everything with her left hand. She not only learned to write left-handed but how to hammer a nail and use a hand saw. Many times, when she was wood working, she would switch hands and keep on working. She enjoyed being a cub scout den mother and loved to make beautiful Memorial Day wreaths and sprays and was asked to go to Souix City and design wreaths for a floral company but refused to leave Colome and her family .    Marg made her own kitchen cabinets and display cases. She loved to sew and cook, and is well remembered for her jellies, swiss steak, peach pie, and chocolate cakes. As the years went by Gamble merged with the Skogmo company and finally closed down. Ben and Marg then changed their suppliers and continued on as Vavra's Store carrying the same items as before. Ben and Marg operated the store for 50 years and finally closed to Ben's declining health in October of 1997. Marg's main concern was taking care of Ben as he never wanted to go to the nursing home and never did. Here enjoyments were her family, especially the grand kids, cooking, sewing, and the Nebraska and the Green Bay Packers football teams. In September 2004 after 62 years of marriage Ben passed away. Marg continued to live in Colome and do her own mowing, make a weekly trip to the casino,  the grocery stores in Winner and Gregory and would still repair a shingle on the roof at 100 years of age and danced a polka dance with her son at her 100th birthday party . At 103 she had to give up her driver's license do to losing the sight in one eye and went to the Assisted living in Armour SD. to be closer to her family and finally at 104 she moved into the Avantara Armour nursing home until her peaceful passing July 8 2020 at 105 years of age. When she was asked how she was able to live so long and she would always reply growing up we ate a lot of liver and beans and most of all hard work.