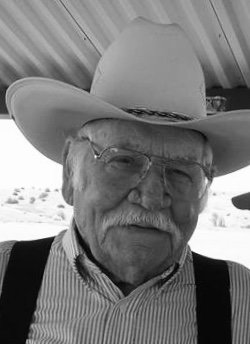 He graduated from Geddes High School in 1943 and served in the US Navy on the USS Baltimore during WWII from Feb. 1945 to July 1946. He worked on the ship as a metal smith and served in the South Pacific. In October of 1947 he married his sweetheart, Lorraine Pesicka, at St. Ann’s Church in Geddes. To this union 3 children were born, Randy, Sandy, and Connie.

They farmed the family (Hruska-Bruner) homestead and proudly displayed the deed signed by President William McKinley. The farm received the Century Farm which now has been in the family for 120 years. He also worked full time at the Soil Conservation District in Lake Andes from 1966-1985 where he received numerous awards and honors. He was fortunate to celebrate his 60th wedding anniversary with Lorraine before her death in 2008.

For over 55 years he was involved in the Geddes American Legion and VFW where he served as Commander from 2003-2015. At age 90 he decided he’d served long enough in the Honor Guard at funerals.

He moved off the homestead in 2011 and enjoyed woodworking including making a wooden rosary, restoring the plow used on the homestead by his Hruska grandparents, and a push mower. He loved playing solitaire, a good game of pitch and pinochle. He liked driving his 4-wheeler around town, to the cemetery, and on the farm (at about 10 mph). He was still gardening and never missed a birthday card to his greatgrandchildren with a “little green” enclosed. As he aged he didn’t like reading in the Daily Republic about his friends in the obituaries.

Survived by his remaining brother, Ed (Betty) Bruner, sister-in-laws Ruth Creasey and Joan LeDoux and many nieces and nephews.

Preceded in death by his wife, Lorraine, a greatgrandson Jonah Bruner, his brothers Tom and Richard, and a host of inlaws.