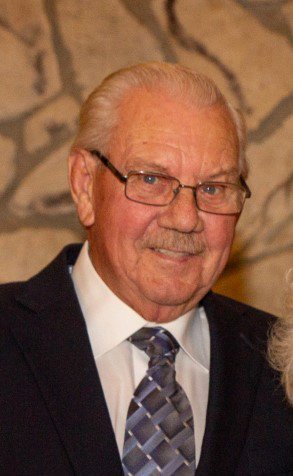 Please share a memory of Alvin to include in a keepsake book for family and friends.
View Tribute Book

Alvin Faye Groeneweg was born on November 5, 1937 to Henry and Gertie (Vanden Hoek) Groeneweg on the family farm northwest of Corsica, SD. He received his elementary education at a country school and attended Corsica High School for nearly two years. He spent the next few years working alongside his Dad on the farm until he married Vivian Vander Zee from New Holland, SD on July 9, 1958.

He then began his lifelong career as a farmer, living for two years north of Harrison in Garden Valley, moving to a farm in Aurora County for seven years and re-locating to a farm east of Harrison, where he lived the remainder of his life. He loved farming and was a good steward of the land. Getting those corn rows planted straight during planting time was one of his goals. He enjoyed his herd of stock cattle, always going out early in the morning in the springtime of the year to check for new calves. Horses brought much pleasure to his life. He usually had a saddle horse around ready to ride. He later enjoyed driving a team of horses, pulling a buggy, or the covered wagon which he built. He enjoyed many trail rides, especially the 2014 South Dakota Wagon Train, traveling from Yankton, SD to Pierre, SD. He was privileged to shake the hand of Governor Daugaard when reaching Pierre. He also loved bowling and golfing. He created many memorable times with his buddies. He loved hunting with family members, his trips to Alaska where he shot a moose and a bear.

In his later teens he made profession of his faith in Jesus Christ as his Savior and joined the First Reformed Church of Harrison , SD, now known as the Harrison Community Church. There was a time when he taught Jr. High Catechism. He served several terms on the church council as an elder and a deacon.

In 2012, it became evident that Alzheimer’s was beginning to invade his life. He handled the disease very graciously. Later when it became difficult to know how to do things, he was always eager to lend a helping hand.

The day after his birthday, he became sick with Covid 19. He tried hard to overcome it. Five weeks later, on December 11, 2020, he died from its complications under Hospice Care at the Douglas County Memorial Hospital. He was 83 years old.

Alvin lived life to the fullest. He was a kind, caring man who dearly loved his family. He will be missed by his family who loved him so dearly and by all who knew him.

He was preceded in death by his son Leslie (November 12, 2016), his parents, a brother Merlin and wife Donna, and brother-in-law Lawrence Tolsma, his parents in-law Dave and Nellie Vander Zee and several in-law siblings.