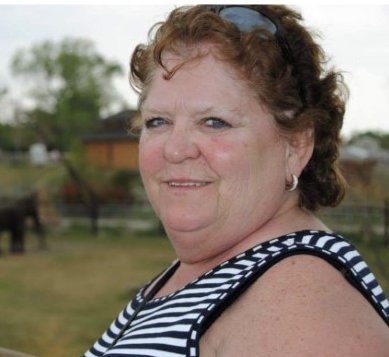 Please share a memory of Paula to include in a keepsake book for family and friends.
View Tribute Book

Paula Mae Schweitzer, 62, peacefully passed away with her family by her side on February 7, 2021 at Sanford Hospital in Sioux Falls. A memorial service will be held on Monday, March 1, 2021 at 2:00 PM at St. Mark's Catholic Church in Lake Andes.

Paula was born to James and Alberta Griffith on November 10, 1958 where she gained her lifetime best friends, her sisters Cora and Veretta. The family was blessed with a brother, Jimmy. Paula graduated from Lake Andes High School.

At age 15, Paula started working at Pete’s Café in Lake Andes, where she met her first love and the last love of her life, Kenny Westendorf. Kenny and Paula went their separate ways at the end of high school, and she married and started her a family with Rob Engel. After moving to Bison, SD, to Sturgis, Paula then married her second husband, Curtis Schweitzer and her family grew. Paula and her family moved to Lead, SD where they lived for many years and she was active in the community and children’s activities. After her children grew up, she moved back to where her roots started in White Lake, SD where Paula reconnected with Kenny in 2016. They had many similar interests and rekindled their teenage love story. Paula treasured the time that she spent with her family and friends; she cherished being involved with her children and grandchildren’s activities. She had two fur babies, Curby and Stella Rose, who brought her unconditional love. Paula belonged to the Ladies Auxiliary Club of White Lake and she had a cleaning business for many years where she made friends with everyone she encountered.

Paula was an avid camper and loved the summer weather. She liked boating, fishing, kayaking, and getting others to join her in the summer fun; Paula knew how to throw a good party. Paula was a creative person and enjoyed making crafts. She always loved a good deal, and she a could often be found hunting for the best sale with her sisters. Veretta, Cora, and Paula were the “three amigos” and they often did things together; family was the most important thing to Paula.

Paula’s children include Ginger (Chris) Larsen of Billings, MT; Stephanie (Scott) Owens of Rapid City; Justin (Chrisi) Engel of Sturgis; and Jason Schweitzer of Spearfish, SD.
Paula’s grandchildren held a special place her in heart and are loved deeply. Her grandchildren include Jesse (Alexandria), Jayden, Kylee, Preston, Samantha, Destinee, Dmitri, Dace, and Ava. Paula’s great grandchildren brought her many smiles and include Ryder, Pyper and Kashlynn. Paula has many aunts, uncles, cousins, nieces, and nephews that she loved dearly.

Paula was preceded in death by her parents, James and Alberta Griffith, and younger brother Jimmy.

Share Your Memory of
Paula
Upload Your Memory View All Memories
Be the first to upload a memory!
Share A Memory
Send Flowers
Plant a Tree