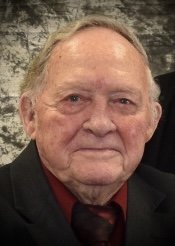 Please share a memory of Lloyd to include in a keepsake book for family and friends.
View Tribute Book

Lloyd Van Genderen was born on November 8, 1932 to Harry and Jennie (Tolsma) Van Genderen on a farm near Aurora Center. As a child, and the oldest son in a family of eight children, Lloyd enjoyed spending time with his siblings and reading bible stories to his younger brothers and sisters.

Lloyd often shared fond memories of helping his grandparents, growing up on the farm, and enjoying times with neighbors, friends and family in his Aurora County community.

Lloyd was united in marriage with Margie Weins 63 years ago. The couple lived on their farm for 56 years near Aurora Center and raised 5 children, the light of his life.

Lloyd enlisted in the US Army and served in Korea. Later in life, he had the privilege of going on a Honor Flight to Washington, DC. Lloyd was a member of the Aurora Reformed Church and was proud of his history with the church. He was baptized, made confession of faith, was married, and baptized his 5 children at this church where he served as an Elder, Deacon and taught Sunday School.

Lloyd was known for his positive attitude and finding the best in everyone. He always lent a word of encouragement, and saw better times around every corner. Lloyd was always up for a game of cards, a cup of coffee, or hearing the latest on crops, kids, or cows.

Lloyd enjoyed sports. He played softball for years, and enjoyed playing volleyball, fishing, hunting, bowling, watching the Minnesota Twins, playing cards with family and friends, and golfing --- where he got a hole in one on his very first shot!

The two things most important in Lloyd’s life were his faith and his family. Lloyd had a strong faith and was a witness in words and actions to his family to the end of his life. He loved spending time with his 13 grandchildren and 21 great children who also appreciated every minute shared with him.

He was proceeded in death by his parents.

In Lloyd’s memory, his family has established memorials to be directed to Stickney’s first responders.

Share Your Memory of
Lloyd
Upload Your Memory View All Memories
Be the first to upload a memory!
Share A Memory
Send Flowers
Plant a Tree