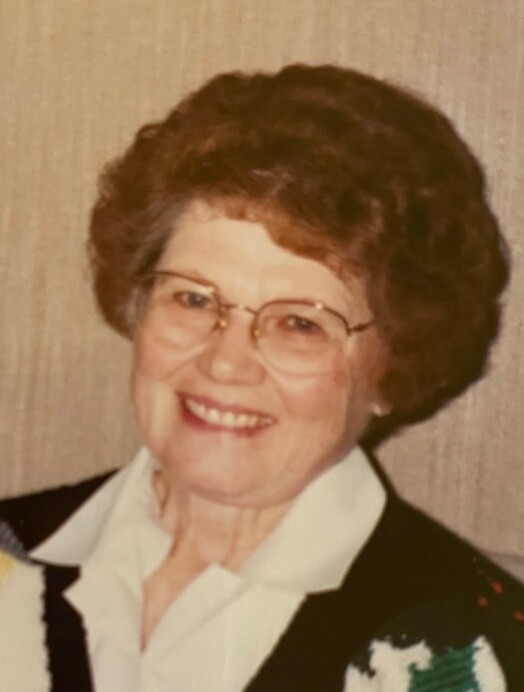 Please share a memory of Edna to include in a keepsake book for family and friends.
View Tribute Book

Edna Marie Laber, 96, went to her heavenly home on Monday, September 20 at her home in Springfield, VA.  Visitation will be Thursday, September 30 from 10:00 to 11:15 am at Koehn Bros. Funeral Home in Parkston followed by an 11:30 am graveside service in Sacred Heart Catholic Cemetery in Parkston.

Edna Marie Sprecher was born April 7, 1925 in Parkston South Dakota to Emanuel Sprecher and Ida (Winter) Sprecher. Edna spent her childhood years on the family farm outside of Parkston. She met her future husband, Francis (Fran) Laber at Parkston High School where they both graduated in 1943. After Fran returned to Parkston after serving in the Pacific during World War II, they were married in Parkston on March 4, 1946.

Edna and Fran worked hard in those early years as they made their life together. They operated the Coffee Shop from 1946 to 1950. Fran began the insurance agency in 1950. After their daughters were born, Edna stayed at home with the girls and managed a spotless household and in those early years sewed many of their clothes. When they could manage it, Edna and Fran would go dancing with friends in Mitchell.

Tragically, on November 27, 1988, Fran died following complications from surgery. Besides the loss of her husband, Edna was faced with managing her household and all of the financial transactions that Fran had previously handled. Edna did very well in this new role. After a few years, Edna decided to move to Virginia to be close to Connie and her family

Edna was an elegant lady and had great taste in clothes and household furnishings. She moved into a retirement community in Virginia and it reflected her excellent taste. Edna enjoyed her time there and always dressed nicely for dinner. Even years later, when she was in declining health she would refuse to wear clothes that were “not in season” and don’t dare suggest she wear a blouse that had a wrinkle in it!

While in Virginia, Edna and Connie would go each year to New York to see the Rockettes at Rockefeller Center and enjoy some nice restaurants. Edna loved those trips and always looked forward to them. During those years in Virginia, Edna was able to attend her two grandsons’ college graduations and their weddings in California and Puerto Vallarta, Mexico. Edna was also able to meet her five great grandchildren.

Edna passed away on September 20, 2021. She was preceded in death by her parents, Emanuel and Ida Sprecher; her husband Fran; her daughter Cori; and her brothers Edwin, Herbert and Raymond. She is survived by her daughter Connie Gregg and son-in-law, Dick; her grandson Ramsey (Melissa); her grandson Matt (Renee) and grandchildren Colin, Connor, Madeleine, Morgan and Silas. She is also survived by her two sister-in-laws, Dorothy (Matthaei) Sprecher and Jeanne (Maxwell) Laber; her brother-in-law Joe Laber and sister-in-law Lois Laber; as well as numerous nieces and nephews.

Share Your Memory of
Edna
Upload Your Memory View All Memories
Be the first to upload a memory!
Share A Memory
Send Flowers
Plant a Tree