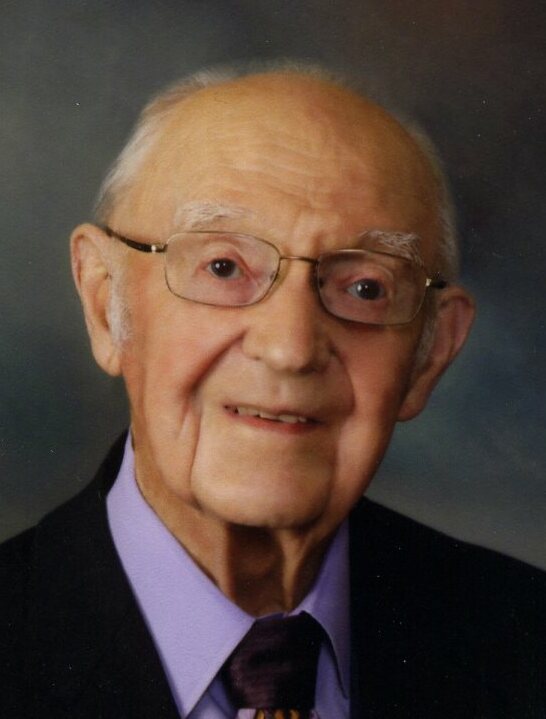 Please share a memory of Norbert to include in a keepsake book for family and friends.
View Tribute Book

Funeral services will be at 2:00 pm, Saturday, March 19, at Zion Lutheran Church, Delmont.  Burial will be in the Delmont Lutheran Cemetery.

He was born on November 6, 1919, at home in Douglas County, SD, to William and Johanna (Mattias) Wenzel.  He grew up on a farm northwest of Parkston, South Dakota, during the Great Depression and the Dust Bowl years.  His grade school years were completed in a country one-room school (Washington District 28).  He was baptized and confirmed at Immanuel Lutheran Church in rural Dimock.  Growing up on a farm, during his years at home he helped out with farm chores and farming.  He attended high school in Parkston, SD, graduating in 1937.  While in high school he worked at the Koehn Grocery in the hours after school.  He received his teaching certificate from Southern Normal Teachers’ College, Springfield, SD.  He then taught country school for five years in Hutchinson, Davison, and Douglas Counties.

On Easter Sunday, April 25, 1943, he was united in marriage to Helene Struck at Immanuel Lutheran, rural Dimock.  They lived in Delmont, SD, 59 years of their married life, then moving to Mitchell, SD.  After 60 years of marriage Helene passed away in May of 2003.  In December of 2010 he was married to Cleva Hogrefe.

After teaching country school for five years he took a position as the Deputy Auditor for Douglas County.  Shortly thereafter he was asked to come to Delmont and work at the Delmont State Bank (which became First State Bank, and is now a Bank West) as a cashier.  From 1966 through retirement he was the loan officer and Vice President/Manager.  He was there from June of 1943 through December of 1984.  Along with the job came the sales of insurance, and cashiering/clerking at many auction sales; which he did for about 23 years.

In 1947 he was one of the charter members starting the Delmont Baseball Association; and was active in the local baseball association for over 50 years – as a catcher for many years, then shifting to umpiring for many additional years, and serving on the Board of Arbitration of the Sunshine League.  And he continued to enjoy attending baseball games throughout his remaining years.  He was the photographer for the Delmont Fire Department and a volunteer fire member for about 25 years.  He was very active in developing, managing, and promoting the Delmont – Tripp Golf Course from 1945 and after – restoring the greens, expanding the course, converting to artificial grass greens, adding a large share of the trees, and in the overall care of the course.

He was an active member of the Delmont Community Club from its inception until he moved to Mitchell.  Over the years he was Chair of the group a number of times.

He was President of Group 3 of the South Dakota Bankers’ Association for three years.

He was an active member of Zion Lutheran Church in Delmont, at one time or another holding all the various offices; participated in Lutheran Laymen’s League and held offices in this organization; 4 times was a delegate to the South Dakota District Church Convention and in 1982 served as a delegate to the synodical convention.  He was a representative for the Lutheran Laymen’s League for many years, taught Sunday School for several years, sang in church choir, and was a lifetime member of the Christian Society.  In their early years of marriage, Norb and Helene were the custodians of the church as well.

In his early years in Delmont he started a Boy Scout Troop and was the Scout Master for 11 years.  During these years the scouts were taken to Camp Shetek in Minnesota a few times for camping experiences.

He was on the City Council for 29 years, and was Mayor of Delmont for 11 years.

He was instrumental in getting a sewer system for the town of Delmont.  With his brother Gottlieb he started the Delmont Development Corporation in 1975 and served on the Board.  Through this the FHA approved and funded two four-plex apartments for Delmont, which he managed for 20 years.

After moving to Mitchell in 2002, he was a member of the Senior Citizens Program and volunteered at Brady Nursing Home and Wesley Acres Senior Center.

In December of 2010 he was married to Cleva Hogrefe at Zion Lutheran Church in Mitchell, SD.  They were able to enjoy 7 years together before Cleva passed away October 14, 2017.

Share Your Memory of
Norbert
Upload Your Memory View All Memories
Be the first to upload a memory!
Share A Memory
Send Flowers
Plant a Tree