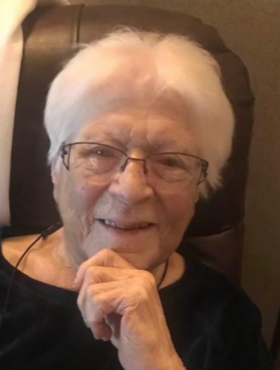 Please share a memory of Marceline to include in a keepsake book for family and friends.
View Tribute Book

Marce was born September 9, 1924 to Joseph and Louise (Muntefering) Hohn.  She grew up on a farm 8 miles west of Ethan, SD and attended country school near there.  She was united in marriage to Louis Degen on April 29, 1946 at Emsley Church near Ethan.  The couple farmed until 1955 when they moved into Parkston, SD and built Degen's Bar.  They operated the bar until selling it to buy the Parkston Grain Elevator.  Marce was a member of Sacred Heart Catholic Church, Altar Society and the American Legion Auxiliary.  She loved to attend her grandchildren's and great-grandchildren's activities and also enjoyed playing cards and dancing.

She was preceded in death by her parents; husband, Louis; and 4 siblings:  Willard Hohn, Hilda Herman, Stella Klumb and Vilas Hohn.

Share Your Memory of
Marceline
Upload Your Memory View All Memories
Be the first to upload a memory!
Share A Memory
Send Flowers
Plant a Tree