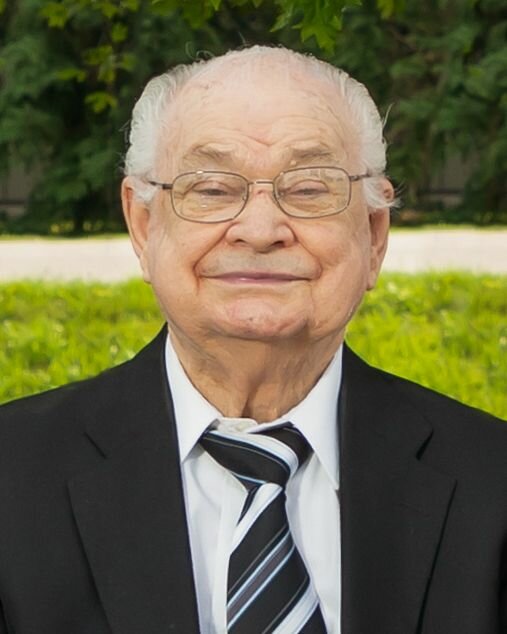 Ted was born on May 17, 1928, to Jacob Bader & Lydia (Weller) Bader in New Leipzig, ND. He passed away on June 24, 2022, in Parkston, SD. He spent his younger years in the New Leipzig area, and moved to Billings, MT. By the age of 12 Ted had already found his love for God and decided to serve as a minister. He was very active in the Boy Scouts from a very young age and achieved the rank of Eagle Scout. He graduated from Billings, MT Senior High school in 1946.

Ted received his Bachelor of Arts degree in Religion and Psychology from Yankton College in 1950. He graduated from the Yankton School of Theology with a Bachelor of Theology in 1951 and from the Hartford Theology Seminary in Hartford, CT with a Masters of Divinity in 1954. He was ordained with his sister Gertrude to the Christian Ministry on September 2, 1951, in his home Church of Pilgrim United Church of Christ in Billings, MT.

Ted met the love of his life Vernetta Steiger at a UCC conference in Billings in 1949. They both attended Yankton college and were married on June 11, 1951, at the German Congregational Church in Selby, SD.

Rev. Bader held many local and national church offices: Chairman of the Board of Christian Education, member of the Executive Committees of the General Conference of Congregational Churches, Moderator of the Conference, 15 years as a Member and Chair on the Board of Directors for the Dakotas, charter member of the United Theological Seminar, 15 years on the Board of Trustees of the United Theological Seminar, Member and Chair of the Church and Ministry Committee, Dean of senior high youth camps in North Dakota Conference of the UCC; Dean of the Pastor’s Continuing Education Camp in the South Dakota Conference of the UCC; and membership on the Alumni Council of Yankton College, served as Moderator for the National Board of the UCC of the North and South Dakota Conferences, was named Distinguished Alumnus for United Theological Seminary in 1992, and was elected a General Synod Delegate for the National UCC Convention several times. Rev. Bader also set up ministerial associations in Carrington and Parkston. In addition to all the national committees, his greatest joy was serving the local church, where he performed thousands of baptisms and weddings and comforted friends and family in their time of grief. As a surprise during his retirement, the senior high group of the Parkston church arranged with Gov. Willian Janklow to proclaim September 10, 1995, Reverend Theodore Bader Day.

Other community activities include organized Parkston Ministerial Association, organized Meals on Wheels, Member of Parkston Lions Club for over 50 years and during that time received the Melvin Jones Fellow award in 2001, as well as being one of Parkston’s first ambulance drivers.

As a student pastor, Rev. Bader served Presbyterian churches in Tabor and Tyndall, SD and the Congregational Church parishes of Hazen and Merricourt in ND as well as in Selby, SD.

In 1971, Ted and Vernetta moved their family to Parkston, SD where he became the Pastor of Salem United Church of Christ until his retirement in 1995. After retirement, he served as pulpit supply for twenty years.

In 2016, Ted and Vernetta moved to Good Samaritan Center in Tripp for one year. Then they moved to Bormann Manor in Parkston.

Ted’s greatest loves were his family, his church, and his community. You could see him riding his bike around town waving to everyone along his way. He was known by friends and family for his delicious homemade ice cream and popcorn. Rev. Bader was an avid Trojan fan attending all the sporting events for years. During the 2011-12 school year they were honored to receive the fan of the year award from the school. He was also his grandchildren’s biggest fan by traveling to all their sporting events.

He will be dearly missed by his family, friends, congregation, and the wider Parkston community. “Well done, good and faithful servant.”

He is preceded in death by his parents, his sisters, his brother, his son Paul, and infant children David and JoAnn.

Share Your Memory of
Rev. Theodore
Upload Your Memory View All Memories
Be the first to upload a memory!
Share A Memory
Send Flowers
Plant a Tree