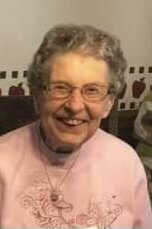 Please share a memory of Eldora to include in a keepsake book for family and friends.
View Tribute Book

Mitchell – Eldora Marlyne Isaak, 88, went to her heavenly home Sunday, July 31 at Avera Brady Health and Rehab.  Funeral service will be Wednesday, August 3 at 10:30 am at Resurrection Lutheran Church in Mitchell.  Visitation will be Tuesday, August 2 from 7:00 to 8:30 pm at Koehn Bros. Funeral Home in Parkston.

Eldora was born January 19, 1934, to Arthur and Ottelia (Semmler) Schuh of Delmont, SD.  She grew up on the farm and graduated from Delmont High School.  After graduation, she taught in a country school for 2 years.  She was united in marriage to Clifford Isaak on May 21, 1954.  To this union, 2 children, Carol and Colleen, were born.  They farmed near Parkston, SD until 1971 when they moved to Mitchell, SD.  Eldora was a housewife by trade but worked briefly in health care.  She loved family gatherings and enjoyed quilting, word puzzles, reading and playing cards with friends.  Eldora and Clifford entertained others with Clifford playing his accordian and Eldora accompanying on the drums.  She volunteered at the JVCC in Mitchell where she led the exercises and walking programs until the pandemic of 2020 kept everyone home.  She also volunteered at Firesteel Healthcare Center where she earned the 2015 Volunteer of the Year award.

She was preceded in death by her parents; husband, Clifford; grandparents; a sister, Kathleen Albom; a son-in-law, Allen Linn; and numerous aunts and uncles.

Share Your Memory of
Eldora
Upload Your Memory View All Memories
Be the first to upload a memory!
Share A Memory
Send Flowers
Plant a Tree