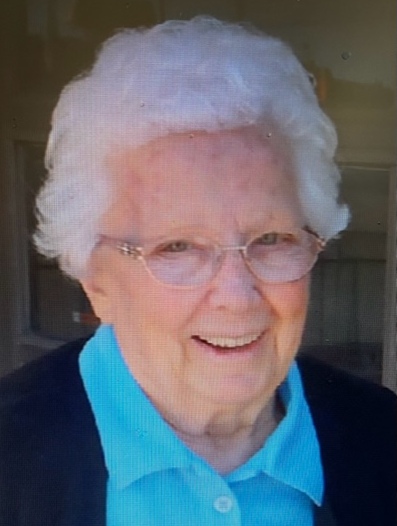 Please share a memory of Everine to include in a keepsake book for family and friends.
View Tribute Book

Everine Plooster passed away on July 15, 2022 at Emanate Health Hospice, West Covina, CA.  A graveside service will be held at the Harrison Cemetery in Harrison SD on September 15.

Everine Naomi Plooster was born to Simon and Edith (Wolbrink) Plooster on May 7, 1931 in Garden Valley, SD. Everine was the youngest of 9 children. Everine grew up on the family farm in Green Valley during the depression. She helped with the farm work, housework and caring for other family members.

Everine graduated from Corsica High School in 1949. She obtained a teaching certificate from Northwestern College, Orange City, IA in 1951. Everine indicated that she was only able to attend college because she borrowed from her brother, Lawrence’s “sheep money” which she paid back after she graduated. Everine moved to Azusa, California and continued her teaching career. She was an elementary school teacher at Magnolia Elementary School in Azusa CA for 38 years. She loved teaching the upper elementary school ages. She felt children of this age were very enthusiastic and open to learning new things.

Everine obtained her master’s degree in education from University of Southern California. She completed the coursework for her PhD but didn’t complete her dissertation once she learned she could no longer be a classroom teacher if she  completed her degree. She indicated she did not want to be a “paper pusher”. She wanted to be in the classroom teaching children and making a difference.

In 1972, Everine married Louis Sandoval. He was a fellow teacher at her elementary school and shared her love of teaching and learning. They shared interests in deep sea fishing, golfing, betting on horse races, traveling and doing New York Times crossword puzzles (in ink). They enjoyed very competitive games of cards and board games  together. She admitted she was unhappy when she lost which wasn’t often.

Everine was a very intelligent, strong willed, independent, tenacious and opinionated woman.  She always spoke her mind regardless of the feedback from her audience. She was very private about her personal life because she felt she could manage it without  unnecessary input from anyone else. Her nieces and nephews remember her visits to Corsica to visit her parents. They admired her sense of style from her choice of cars to her clothes, makeup and hair styles. Even though she lived in California for many years, she still retained the rural Midwest point of view and values.

She is survived by numerous nieces and nephews and their families. She is also survived by her good friend, Dennette Miramontes in California. Dennette was a friend of many years who was a frequent lunch buddy along with a great source of caring support and assistance in her later years.

Share Your Memory of
Everine
Upload Your Memory View All Memories
Be the first to upload a memory!
Share A Memory
Send Flowers
Plant a Tree