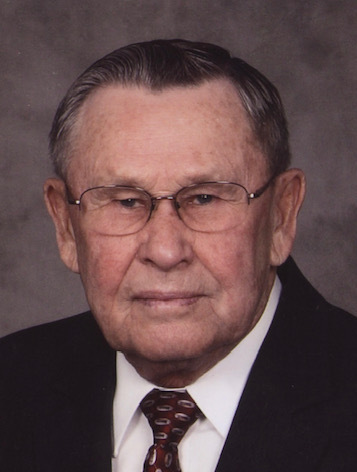 Parkston – Harold Clifford Fischer, 90, went to his heavenly home Thursday, December 15 at Avera Bormann Manor.  Funeral service will be Thursday, December 22 at 10:30 am, with visitation beginning at 9:30 am, at Parkston Congregational Church in Parkston The commital service will follow in the Parkston Protestant Cemetery. Arrangements were under the direction of the Koehn Bros. Funeral Home in Parkston.

Harold was born on November 3, 1932, to Christian C. and Johanna (Drefs) Fischer on a farm north of Delmont. He grew up on the family farm and attended nearby country schools. After graduating from the eighth grade, he stayed home and helped his parents operate the farm. Harold entered the United States Army on December 3, 1953, completed basic training at Fort Riley, Kansas and served in Japan. After his honorable discharge on November 25, 1955, he moved back to the Parkston area and started farming.

On November 25, 1959 he was united in marriage to Mary Ann Hohn in Dimock, SD. Together they made their home on a farm southwest of Parkston until 1995 when they retired and moved to their home in Parkston, SD. He was a lifelong member of the Parkston Congregational Church and the American Legion. Harold loved to play cards, go fishing, put together jigsaw puzzles, go to the casinos and visit with friends and family.