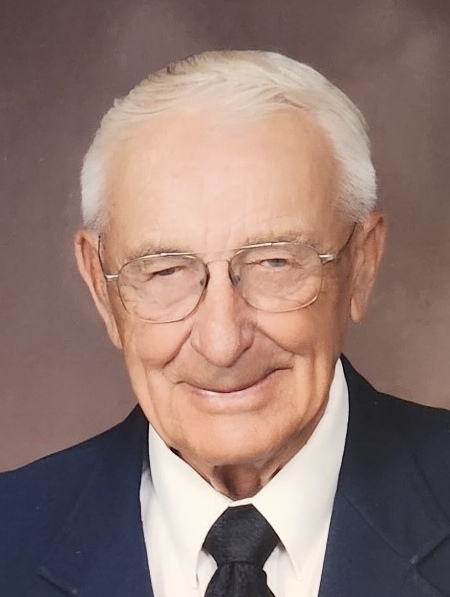 William “Doc” Charles Murtha (Bill), 98, of Parkston, SD passed away peacefully Thursday, December 22, 2022 at his son Lee’s home where he had been residing for the past three years.  Funeral services will be at 10:30 a.m. on Thursday, December 29, 2022 at Sacred Heart Catholic Church in Parkston, SD. Visitation will be held on Wednesday, December 28, 2022 from 5-7 pm at the Sacred Heart Catholic church followed by a prayer service at 7 p.m. Arrangements by Koehn Bros. Funeral Home in Parkston.

William Charles Murtha was born on May 15, 1924 to Edward and Josephine (Frederick) Murtha west of Parkston, SD. He attended Parkston High School and went on to a career in farming that spanned more than 80 years. On June 18, 1955 Bill was united in marriage to Betty Marie Stoebner at Sacred Heart Catholic Church in Parkston. Bill and Betty were blessed with 12 children.  Bill was a lifelong member of Sacred Heart Catholic Church, lifelong member of the Knight’s of Columbus (fourth degree), served on the Hutchinson County Township Board, National Farmers Organization (NFO), Farmers Union, and worked as a Crop Survey Reporter. He enjoyed dancing, polka music, singing in the church choir, playing cards, and loved spending time visiting and laughing with family and friends, especially his grandchildren and great grandchildren.

Bill was a kind man with a huge heart. He was full of JOY and laughter, loved to tease, and was always willing to help others first. He took great pride in being a farmer and being able to farm the family farm where he and his siblings grew up. He was a true steward of God’s creation and loved the land, nature, raising crops, cattle, hogs, a garden, and planting trees.  Bill always had wise words of wisdom to share. He took great pride in being a father and good provider for his family, and cared and kept his twelve young children together (with the help of family and friends) after the loss of his wife Betty at the young age of 38. He has dearly missed Betty for the past 52 years.

Bill was a man of strong faith and was blessed to live on the family farm until the age of 95. Prior to his death, he resided with his son Lee and daughter-in-law Pam on their acreage in Bridgewater.