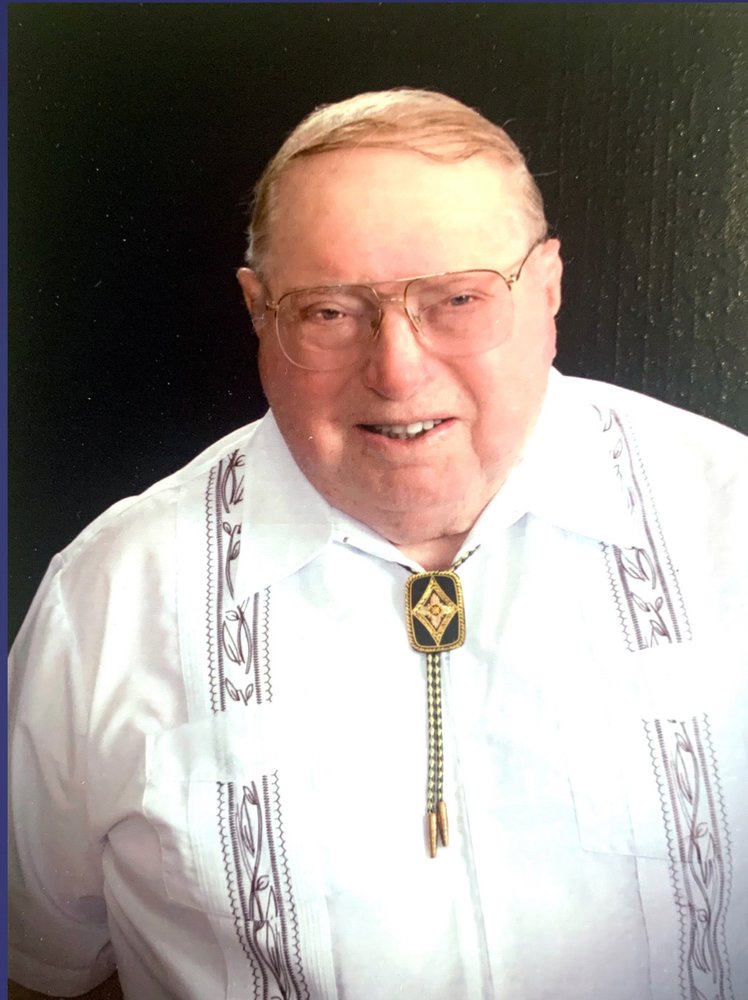 Donald Schulz, 87, of Parkston, South Dakota went to his heavenly home Monday, July 27, 2020 at Tieszen Memorial Home in Marion, SD. Due to COVID-19, the family will hold a private family service at Salem Lutheran Church in Parkston at 10:30 a.m. on Friday, July 31, 2020. Anyone may view the private church service live online via Salem Lutheran Church's FaceBook page. Military Graveside Rites will follow the private family service at 11:15 a.m. in the Parkston Cemetery. Friends and community members are welcome to join the family at the cemetery and are asked to maintain social distancing and wear masks.

Donald Schulz was born on October 6, 1932 to Ewald and Viola (Schelske) Schulz on a farm east of Parkston, SD. He was baptized at Kulm Lutheran Church east of Parkston and confirmed at Dennewitz Lutheran Church east of Tripp, SD. He attended country school east of Parkston through the 8th grade then worked for area farmers. He played drums for Little Elmer’s Accordion Band until 1953. He served in the U.S. Army from March 1953 to March 1955. He was stationed in Korea from August 1953 to October 1954 as a truck driver delivering food rations to the company mess hall. He was promoted to the rank of corporal and finished his tour of duty at Fort Carson in Colorado, transporting military personnel to the Leadville, CO area for winter survival training.

He worked at Leonard Friederich’s grocery store in Tripp for several years following the end of his military service. He married Vernetta Mehlhaf on December 7, 1958 at Kassel Reformed Church in rural Menno, SD and started farming on the family farm 12 miles east of Parkston. They retired in 1994 but continued to live on the family farm until April 2000, when they moved to their home in Parkston. Donald started working for the Parkston School District in 2001, first transporting a student to the South Dakota School for the Deaf in Sioux Falls then later driving the school activity bus until 2011.

Donald was a lifetime member of the VFW and the American Legion and an active member of Salem Lutheran Church. He served numerous times on the church council and other church committees, acted as a delegate to many church conventions, and was an usher and communion assistant. Starting in 1975, he often read the lessons and prayers and was also involved in some lay services. He served as chairman for the planning and building committee when the new entry was built in 1980, and he was on the committee when the interior of the church was redecorated and new pews were purchased in 1988.

Donald served for six years on the Good Samaritan nursing home advisory board. He helped to put out the flags for Labor Day on Main Street, volunteered for Meals on Wheels and cashiered for the Senior Meals program for many years. He liked to travel with Vernetta, especially to Alaska and Branson, Missouri, and loved to get together with friends and family to play games or attend plays, concerts and other events.

Donald is survived by his wife, Vernetta Schulz, of Parkston; his brother, Leon (Carolyn) Schulz of Menno; and by several nieces, nephews, friends and other relatives.

The family request that attendees wear face masks at the visitation and services to protect the health of other guests and family.

Memorial contributions in Donald’s name may be made to the Abbott House in Mitchell, SD or to Salem Lutheran Church for the upkeep of the Kulm and Wittenberg cemeteries.

Due to COVID-19 the funeral service will be family only in the church. However, guest are welcome to join the services live via Salem Lutheran Church's FaceBook Page and are welcome at the cemetery at 11:15. Please practice social distancing and wear a proper face covering.